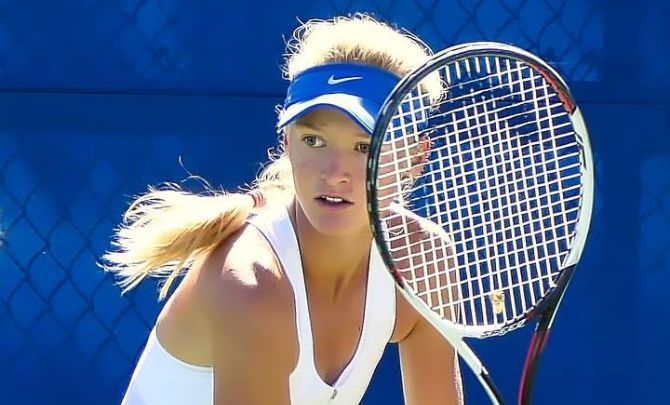 Elvina Kalieva is a young tennis player from the United States. She now ranks world No. 317 in the WTA singles ranking as of 7 March 2022.

Kalieva made her Grand Slam main draw debut at the 2021 US Open, partnering Brantmeier. However, they lost to Ashlyn Krueger and her partner Robin Montgomery in doubles.

Likewise, she alongside her partner Alex Eala competed at the 2020 Roland Garros girls’ doubles tournament in Paris, France. Nevertheless, they were eliminated at the opening round.

In March 2022, she received a wild card to participate in the Indian Wells tournament. As of now, she has earned prize money of $63,291 throughout her career.

Who Are Elvina Kalieva Parents?

Elvina Kalieva is the youngest child of parents Vadim Kaliyev and Rumiya Kalieva. Her parents are from Tashkent, Uzbekistan.

Her father runs a shipping business whereas her mother holds down the fort in the United States. She has an elder brother named Arthur Kaliyev.

Arthur, age 20, is a Uzbekistani-born American professional ice hockey player. He currently plays for the Los Angeles Kings in the NHL.

Kalieva’s parents moved from Staten Island, New York to Michigan and later relocated to San Diego to support her brother’s career. She moved to Florida at age 11 and now resides with her grandparents there.

Elvina Kalieva Boyfriend: Is She Dating?

Kalieva does not have a boyfriend now.

The tennis beauty is actively involved in growing her tennis career. She is not linked with any name who is supposed to be her boyfriend.

Elvina did not have a boyfriend in past.

She started to play tennis at the age of six. Moreover, her preferred surface is hard.

Kalieva stands at a height of 5 feet 9 inches. She is a right-handed player.

Yes, Kalieva is available on Instagram under the username, elvinakalieva. She has amassed more than 2.5k followers on her Instagram.