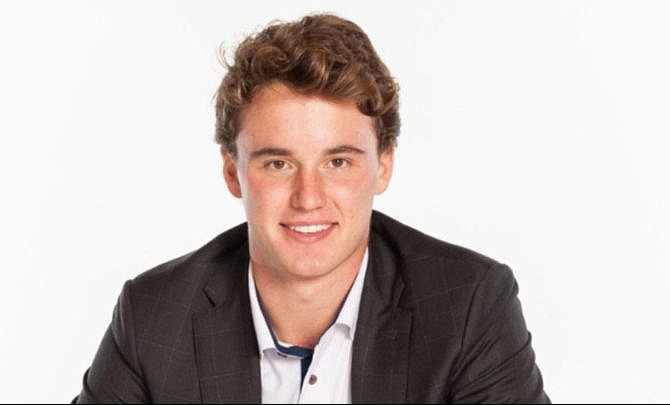 Jake Oettinger is an American professional ice hockey goaltender currently playing for the NHL team Dallas Stars. He was selected by the Dallas Stars in the first round, 26th overall in the 2017 NHL Entry Draft.

After signing the entry-level contract with the Dallas Stars, he was assigned to their AHL affiliate, the Texas Stars. On March 3, 2020, he earned his first NHL call-up in place of Ben Bishop who suffered from a lower-body injury.

Oettinger made his NHL debut in the second game of the 2020 Western Conference Final against the Vegas Golden Knights on 8 September 2020.

Nicknamed Otter, he played collegiate hockey at Boston University for three seasons. There, he earned a bachelor’s degree in Communication and Media Studies.

Oettinger is enjoying his love life with his girlfriend Kennedi Schumacher.

Kennedi is a finance & marketing specialist at Tradition Wealth Management. Moreover, the 22-year-old is a graduate of the University of St. Thomas with a degree in finance.

Jake and his girlfriend have been together for over two gears. They began dating in 2019 and have known each other since their childhood.

Who Are Jake Oettinger Parents? Inside His Family Life

Oettinger is one of the three children of his parents Chris Oettinger and Kateri Oettinger. He was born Jakob Oettinger on December 18, 1998, in Lakeville, Minnesota.

The 6-foot-4-inch was raised by his parents in Minneapolis-St. Paul area. His parents are no longer together now.

Jake Oettinger Salary: How Much Does He Earn?