Joey Daccord plays as a goaltender for the Coachella Valley Firebirds in the American Hockey League, AHL. He is under contract to the NHL team, Seattle Kraken.

The player was selected by the Ottawa Senators in the 2015 NHL draft. He then played with the UHSL team Muskegon Lumberjacks for a season and then joined Arizona State University to play collegiate hockey.

After playing for three seasons in the NCAA, he penned a two-year entry-level contract with the Senators on 1 April 2019. Three days later, he made his NHL debut making 35 saves in a 5–2 loss to the Buffalo Sabres.

Daccord spent the 2019–20 season with the AHL team Belleville Senators and the Brampton Beast of the ECHL. On 21 July 2021, he was selected by the Seattle Kraken in the 2021 NHL Expansion Draft.

Another Hockey Star: Who Is Tristan Jarry Wife Or Girlfriend? Inside His Family & Personal Life

Joey Daccord Girlfriend Or Wife: Inside His Personal Life

Daccord does not have a wife as he is unmarried now. Meanwhile, he is currently dating a beautiful girlfriend as per his Instagram.

The goaltender is enjoying his love life with his girlfriend Lexi Dickinson. A native of Perrysburg,  Ohio, she earned her BSN from Bowling Green State University. Moreover, she is a family nurse practitioner student as per her Instagram bio.

As per his Instagram posts, the couple has visited the United Kingdom and France, joined by his family members.

Joey was born to parents Brian Daccord and Daniela Daccord on 19 August 1996. His father Brian was also a professional hockey player who played for six years in Switzerland.

Brian played collegiate hockey as a goaltender at Merrimack College from 1983 to 87. Moreover, he has served as the goaltending coach of the men’s ice hockey team at Boston University.  He is the president of Stop It Goaltending, a sports complex in Woburn, Massachusetts. 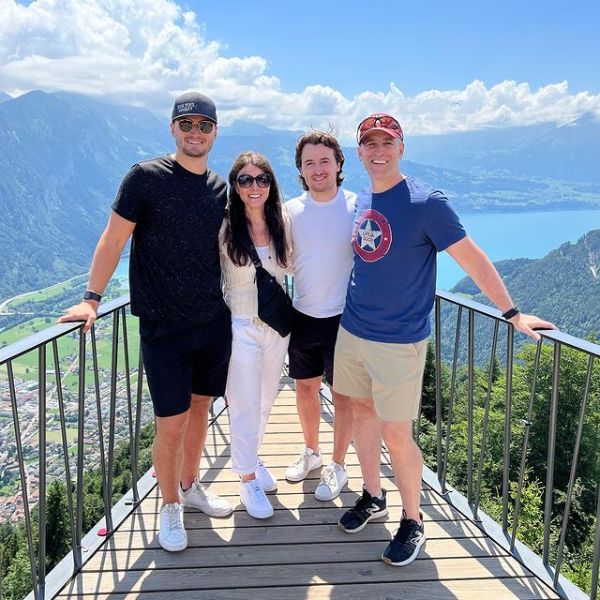 Joey Daccord poses with his parents and brother during a family trip to Switzerland in June 2022. (Source: Instagram)

Joey is the eldest in the family and has a younger brother named Alex Daccord. Alex is also a hockey player who played in the NCAA III division with Saint Anselm College.

What Is Joey Daccord Nationality?

Daccord is Swiss-American by nationality. He has three citizenships in Canada, Switzerland, and the United States.

The player’s father is a native of Montreal, Canada. Likewise, his mother Daniela hails from Switzerland where his father met her while playing pro hockey there.