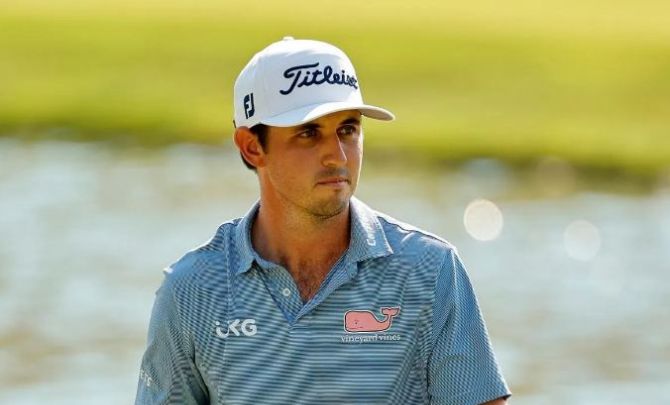 J. T. Poston is an American professional golfer. He started his golfing career at a young age and finally turned professional in 2015.

Poston’s love for golf comes from his grandfather, Charles Cunningham. Charles, a commercial real estate agent, gave Poston his first wood at the age of three.

His grandfather was a competitive golfer as he used to play in senior amateur events. Poston learned everything from his granddad, including how to behave on the golf course.

Thanks to his grandfather’s guidance, Poston became a better golfer and even bagged two conference championships in his college days. Right now, he is doing good on the PGA Tour.

You May Like: Who Is Jason Kokrak Wife? His Golf Ranking, Net Worth, Parents & More

Is J. T. Poston Married? Who Is His Wife?

Poston is yet to be married. However, he is already engaged to his fiancé. His soon-to-be wife is Kelly Cox.

Poston and Kelly began dating somewhere around the start of 2020. In fact, the golfer officially introduced his girlfriend to the public via an Instagram post on 27 January 2020.

After dating for a while, Poston finally popped a question to his girlfriend on 27 November 2021. As Kelly responded “Yes,” Poston shared the engagement news via his Instagram post.

Prior to dating Kelly, Poston was in a relationship with a law student named Nicole Nielly. The two met each other when they were in high school. Eventually, Poston and Nicole started their romance in December 2012.

Unfortunately, the long-haul pair parted ways in 2019. There is no particular reason why they decided to split.

The golfer was born James Tyree Poston on 1 June 1993 in Hickory, North Carolina. Poston is now 29 years of age and he holds white ethnicity.

Talking about his family, Poston is among the two children of his parents, James Tyree Sr. and Cheryl Poston. He grew up alongside his brother named Bailey Poston.

Likewise, Poston’s grandfather was a former amateur golfer, Charles Cunningham. Charles also served as a real estate agent. Unfortunately, he lost his grandfather back in September 2021.

After turning pro in 2015, Poston started 2016 with no status on any tour. Eventually, he Monday qualified for the United Leasing Championship and finished T23.

As a result, Poston got the chance to enter the Rex Hospital Open. Later on, he earned a 2017 PGA Tour card.

Poston earned his first professional victory by winning the Wyndham Championship on 4 August 2019. Later on 3 July 2022, he won the John Deere Classic. The win has secured him a spot in the 2022 Open Championship scheduled for 14 to 17 July 2022.

As of now, Poston is ranked 58th in the PGA World Rankings. Likewise, his total career earnings from different competitions dwell above $1,278,000.

Thanks to his promising golf career, Poston manages a commanding net worth of $5 million.