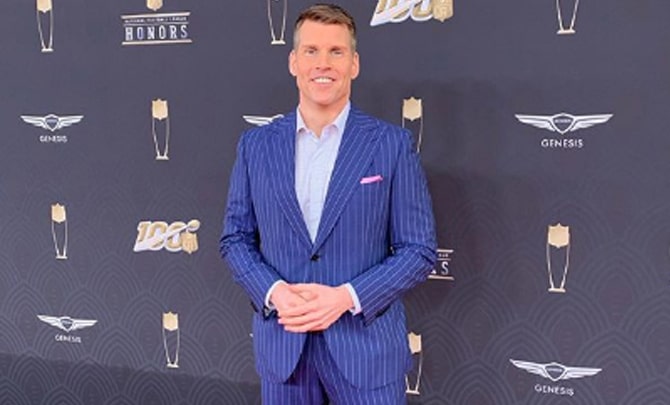 Scott Hanson is an American television anchor and reporter who reports for NFL Network. He currently serves as a host of the sports show, NFL RedZone.

The 48-years-of-age sportscaster was born as Scott Richard Hanson on June 24, 1971, in Rochester, Michigan, the United States. He is among the three children of his American parents. He has one brother and sister named Lisa Hanson.

You May Find Interesting: Jenny Dell

For his long-haul media career, Scott Hanson bags a commanding net worth of $3 million. Moreover, his salary as the NFL reporter surpasses over $146k.

Scott began his career as an anchor and reporter for NBC-affiliate WPBN-TV in 1993. Later on, he reported for WICS-TV and WFTS-TV. He then worked for Comcast SportsNet Philadelphia for two years from 2000. Scott finally joined the NFL Network in 2006 and started serving as a reporter, anchor, and host.

Since 2009, Scott serves as a National Correspondent and host of the NFL Network’s show, NFL RedZone.  Besides, he also co-anchors NFL Total Access during the week.

Scott Hanson is entirely a secluded person when it comes to his personal life. He has kept the information about his dating affairs and relationship on a low key. Besides, his social media accounts are also deprived of the presence of a person who can be given his partner tag.